Beginnings: The Michigan Council of Teachers of English Becomes a Fact

According to MCTE’s first president, George Starr Lasher, “Michigan educators were prominent in the organization of the National Council of Teachers of English” in 1911 (Michigan Education Journal, 1923). In fact, the first president of the National Council of Teachers of English, Fred Newton Scott, taught at the University of Michigan from 1889 to 1927. Despite early involvement from Michigan educators in NCTE, it took a little over a decade to build the momentum and ratify a charter for the Michigan affiliate. An article in The English Journal from 1922 reported that 400 teachers attended the meeting of the Michigan Teachers of English in Detroit on October 28, 2021. Professor George Starr Lasher of the University of Michigan delivered a talk on “The Qualified Teacher of Literature.” Lasher lamented the fact that “children read inferior stories and do not like poetry, whereas the teaching of literature should give a standard of judgment and a capacity for enjoyment” (English Journal, 1922). It seems likely that a group of Michigan English teachers had met regularly since 1911, but that group was not yet an affiliate of NCTE. 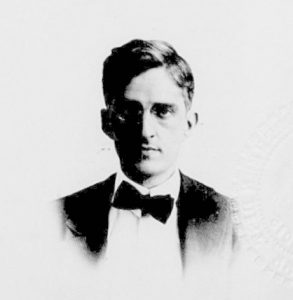 The Michigan Council came into being because there was a need felt for an organization that could make a campaign for improvement of the teaching of English on a state-wide scale and could affiliate itself with the National Council of Teachers of English so that Michigan might profit by the efforts being made nationally toward the same end…The adoption of a constitution at the 1922 meeting of the English section of the Michigan Schoolmasters’ Club and its ratification by various sections of the Michigan State Teachers Association made the Michigan Council of Teachers of English a fact and affiliation with the National Council possible (Michigan Education Journal, 1923).

In that same issue of the Michigan Education Journal, Lasher offered a challenge to Michigan’s English teachers to become involved in the improvement of English education in Michigan. In particular, he encouraged teachers to send him material for publication: “Of particular value will be concise accounts of projects and experiments that have been actually worked out, suggestions for classroom procedure, reports of co-operation with other departments, and discussion of live problems, including those of a controversial nature. Material dealing with problems in schools located in the smaller towns and cities and in rural communities is especially desired” (Michigan Education Journal, 1923). In 1923, anyone who was interested in the effective teaching of English and who could pay the membership dues of fifty cents could join the newly-formed MCTE.

Pioneers in the Teaching of English: New Leaders Grow MCTE

Lasher was instrumental in the formation of the Michigan Council of Teachers of English, but shortly after his term as president, he left the University of Michigan to found the journalism school at Ohio University in Athens, Ohio. He continued to teach into the 1950s and was a beloved professor on campus (Lasher’s Obituary, 1964).

Succeeding Lasher was University of Michigan Professor Charles Carpenter Fries who served as MCTE President for two years. Fries was a distinguished professor of linguistics at the University of Michigan from 1920 to 1958. While at the University, he founded the English Language Institute and served as its director from 1941 to 1956. One aspect of his work in linguistics focused on the best means of teaching languages to native and non-native speakers. He authored Teaching and Learning English as a Foreign Language in 1945. Among his numerous professional leadership roles, Fries went on to serve as president of the National Council of Teachers of English in 1927-28. Today, the MCTE honors Fries’ legacy with the Charles Carpenter Fries Award given each year to an outstanding English educator. The Fries Award is MCTE’s longest standing award with records of honorees going back to 1967.

It bears noting that the third president of the Michigan Council of Teachers of English was Miss Ruth McPhail, a woman (at a time when women were underrepresented in the field) and a classroom teacher in Highland Park, Michigan (at a time when K-12 educators were not always at the forefront of professional organizations). MCTE has continued whenever possible to alternate presidents between K-12 teachers and university professors in order to connect the two spheres of English education. 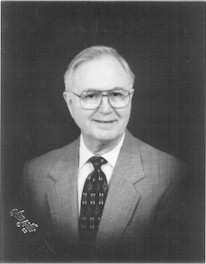 Another significant figure in the history of MCTE was Ray Lawson. Lawson, a teacher at Rochester High School, never served as president but still has the distinction of holding an office on the MCTE Executive Board longer than anyone else. In fact, though we cannot be sure, Lawson may hold the record for longest teaching career among MCTE members. Ray Lawson graduated from Central State Teachers College (now Central Michigan University) in 1940. After his first year of teaching, he was inducted into the United States Army prior to Pearl Harbor. After his discharge from the Army in 1946, he taught English at Rochester High School for 63 years. Ray earned his Master of Arts degree from the University of Michigan and went on to do post-graduate work at Wayne State, Michigan State, and the University of Michigan. He became an Oakland Writing Project Fellow in 1982. To say that Ray was an active member of the Michigan Council of Teachers of English would be an understatement. He was a member for his entire teaching career, serving as Secretary/Treasurer of MCTE for a combined total of nearly 40 years. In 2002, MCTE honored Lawson with a surprise award — one in his own name! The Lawson Award has been given out yearly since then to an outstanding MCTE educator who has demonstrated leadership to the profession and is held in high esteem by colleagues and students.

For a look at the entire list of presidents of the Michigan Council of Teachers of English, click here.

Through the years, MCTE has been on the forefront of improving English education. In 1938, MCTE Past-President Clarence DeWitt Thorpe of the University of Michigan wrote about MCTE’s efforts at a statewide articulation project. Thorpe described this effort as “a cumulative, progressive program leading from the early grades through high school and college with definitely formulated standards of attainment in language, composition, and reading-literature for each stage in the pupil’s advancement” (Thorpe, 1938). 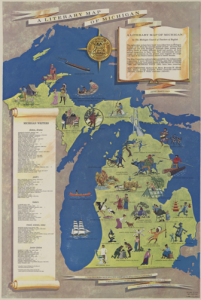 In 1965, the Michigan Council of Teachers of English published A Literary Map of Michigan created by artist Donald B. Gooch. The map highlighted Michigan writers of fiction, poetry, history, and nonfiction. How many of these authors have you read or taught in your classroom? 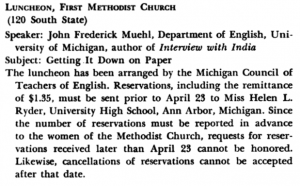 A conference advertisement from 1950. Lunch and learning for $1.35!

The articulation project and consistency of standards in the teaching of English were likely important topics at early annual meetings of the Michigan Council of Teachers of English (since they continue to be important topics today). From the beginning of the organization until the 1960s, MCTE held annual spring conference luncheons in Ann Arbor as part of the Schoolmasters’ Club. Later those spring conferences became 3-day conferences in various parts of the state. MCTE held the first Fall Conference in 1983 at the Kellogg Center on the campus of Michigan State University. Because teachers preferred one central location, in 1985, the MCTE chose Lansing as the place for the annual Fall Conference. It has been held at the Kellogg Center since then.

In 1985, MCTE launched Language Arts Journal of Michigan (LAJM), our award-winning, peer-reviewed journal. In its premier issue, LAJM Editor John Beard of Michigan State University explained that LAJM would appear once in the fall and once in the spring, and would “print articles by Michigan educators involved in English and the Language Arts.” Beard said that MCTE saw “the need to have a state journal, unlike national journals, that would strengthen the relationship between different levels of English and Language Arts instruction: elementary, middle school, junior high, secondary, and college” (LAJM, 1985). Issues of LAJM continue to be published once in the fall and once in the spring. The current call for manuscripts is always posted on LAJM’s Scholarworks portal and submissions are subject to a blind review process before publication. Past issues of the journal are publicly-available. The LAJM has won frequent awards over the years including our most recent award as an NCTE 2022 Affiliate Journal of Excellence.